In this article we shall be looking at Identification of parade in law of evidence. 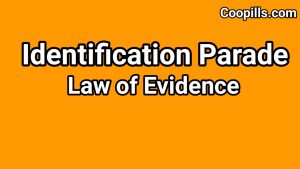 This is the process whereby a suspected person is placed amongst other people of similar physical appearance, height, colour, age and social status to ascertain whether or not witnesses to the offence are capable of recognizing him. It is essential in the following situations:-
(1) Where the victim was confronted by the offender for a very short time.
(2) Where the victim due to time and circumstances might not have had the full opportunity of observing the features of the accused person
(3) Where the accused is not know to the victim before the commission of the offence.
The following conditions must be observed:
(a) witness should not be allowed to be see the suspect before he is place in the parade.
(b) witness must not be allowed to see the suspect nor should be assisted by any form of description of the suspect.
(c) The cloth worn by the suspect must not be worn during the identification parade.
Where the suspect is known to the victim, identification parade is unnecessary. See Aladeu vs State.

Evidence based on identification should consider the following principles:
(a) How long did the witness have the accused under observation?
(b) At what distance?
(c) In what light?
(d) was the observation impended in any way e.g passing of Traffic?
(e) How often?
(f) Is there any special reason for remembering the accused?
(g) How much time elapsed between the original observation and the subsequent identification.