In this article we shall be looking at Kanuri wedding, requirements and mode of conducting the marriage. 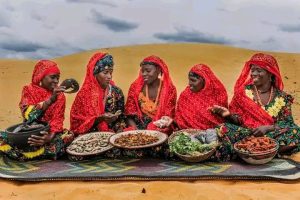 It’s a trait philosophy that almost seventy five percent of Kanuri are muslims. Therefore, they hold nothing like religion diversity among the tribs. Because you may consider the folks as followers of a single religion.

To this end their procedure or process to contract marriage is the same as that of the teachings and dictates of the religion of Islam.
Islamically, marriage is prophet’s tradition. Which he said in a particular Hadith and I quote “marriage is my tradition and whosoever keeps away therefrom, he is not from Me”. He said again “oh! young men; those among you who are capable of marry should marry, for it, keeps you from strange women and preserve you from immortality”.

Qur’an and Hadith are the primary sources of Sharia and their wordings are as of course must necessary to follow. The Kanuri tribe solely believe with polygamy, so also the Quran which stated in its provision.
“If you fear you cannot be equitable to orphan girls (in your charge, or misuse their persons), then marry women who are lawful for you, two, three, or four; but if you fear you cannot treat so many with equity, marry only one, or a maid or captive. This is better than being iniquitous.” See Qur’an chapter 4:3.
The saying of the holy Qur’an above has exception which must be strictly followed, if one cannot be able to be absolutely just among his wives, then he devote himself to marry only one.

1 Marriage guardian is indispensable requirement for the validly of any Islamic marriage. For one to be appointed as a guardian, we must posses some requirements which will make such an appointment valid. He must be a Muslim, he must be capable of understanding question put to, he must be sane in answering question and most importantly he must be a male, Muslim who can be able to run his affairs.

Islam is a religion with diverse intelligence, therefore some school of thoughts opined that a woman in contracting marriage can served as guardian to herself if she can be able to distinguish bad from good, because by doing so, she is doing a lawful act. Hannafi school said “if a woman can enter into a contract, then she can also choose her husband without constrain”.

a. Wali Mujbar mainly applies to the father of a child in question because he is a kind of a guardian that has power of Ijbar. Power of Ijbar is a power vested upon a person serving as a guardian to contract a marriage without the consent of the bride to be.

b. Wali Gairu Mujbar, as opposed to the later, the former is a wali who doesn’t posses the power of Ijbar.

2 Dowry, in Arabic call al mahr, its one of the essential requirement for a valid Islamic marriage. Qur’an in chapter 4:4 said “Give to women their dowers willingly, but if they forego part of it themselves, then use it to your advantage.”
All the schools of Islamic jurisprudence agreed that for a dowry to be acceptable, it must be something of legal value in the eyes of shariah and it can be tangible of intangible. For instance the prophet of Islam conducted a marriage to his fellow with the latest knowledge of Holy Quran as the dowry, at that time, it was Suratul Ikhlas, another provision said one hand of dates was offered and accepted as dowry and yet in another provision of the prophetic Hadith a pair of shoes was given as a dowry.

Consequently, anything that is unlawful cannot be offered as a dowry. For instance, intoxicant, pork, unborn animal, unripe fruit, cannot be offered.
It is important to also note that such dowry is exclusively belongs to the bride and consequently she will only entitle to it upon consummation of the marriage. Consummation may be actual, constructive or implied.

Consummation of marriage is said to be actual where there is conclusive evidence to establish so, according to Maliki, Hannafi and Hambali consummation is implied when the man retire himself with the wife to a place where they are save from the eyes of others, the Hambali school also added that such action such as hugging, kissing are to be regarded as consummation.
For the dowry as the primary and essential requirement, the Holy Qur’an made mention that “Also forbidden are married women unless they are captives (of war). Such is the decree of God. Lawful for you are women besides these if you seek them with your wealth for wedlock and not for debauchery. Then give those of these women you have enjoyed, the agreed dower. It will not be sinful if you agree to something (else) by mutual consent after having settled the dowry. God is certainly all-knowing and all-wise” Quran: 4:24.

3 Witness the presence of witness is also a particular essential requirement for the validity of any Islamic marriage. In fact, marriage will not be consummated if there are no two male witnesses at its formation. According to Maliki school the witnesses must be men of proven moral and religious integrity. Where such men are lacking then at least 30 ordinary men can replace them or the publication of the marriage can suffice.

According to Hannafi school the witness need not to be two as one male and two females can suffice the need. The school took the position as a result of the provision of Qur’an which said “and get 2 witnesses out of your men to witness your transaction and if there are no 2 men, a man and 2 women may act upon agreement”.

Shafi’i school agreed with Hannafi and added that there must not be enmity between the witnesses and that such must no be dept of blind.

Finally, the contact is concluded by prayers commonly referred to as Wedding Fatiha.
Anything mentioned aboved aee the general position of Islam, therefore is certain. Under the Kanuri tradition before a contract should be regarded as marriage certain tradition may exist, which are not necessary. Such as.
1. Wushe-wushe (meet and greet)
2. Kanuri day
3. K3la tul (hair wash)

1. Wushe-wushe means a situation where both of the families will meet at a particular location to greet, sounds will be played mostly traditional drums, the will be husband and the bride in question may come out to hit the traditional dance. It always took place in the night, mostly one day to the wedding and at a location other than each other’s house.

2. Kanuri day is a day where the both houses’ family will wear the kanuri traditional dress which is caftan and a cap. It mostly took place one day after the marriage.

3. K3la tul is when the bride’s hair is washed, it took place soon after the marriage solemnisation. 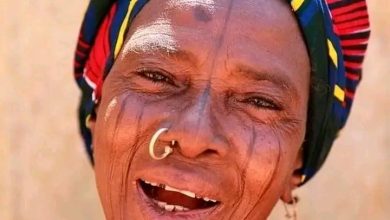