Etsu nupe is the etsu of all nupecizhi in the world. 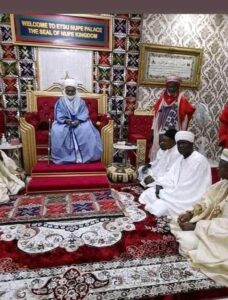 This is a traditional tittle conferred to only Emir of Bida as the etsu of all nupe people.
Emir of nupe is the leader of all nupezhi in the world. Be who you are, one’s you’re a nupe. Emir of nupe is your king.

Emir of Agaye, Emir of Lapai, Emir of lafiyagi, Emir of Patigi e.t.c are all representative of there places. Each head the nupe of his locality.

As kinnupe is very large, their is need we have many kings as we have it today. And among these kings, their is need they have a leader to be the eyeball of the kingdom. That is the Reason why Emir of bida was chosen to be head of these Kings. And this is not restricted to a particular person or a ruling king. This tittle is given to the Emirate.

As history has it, Bida Emirate is not the first Emirate to be confer with title of Etsu nupe. Perhaps it might shift one day but for now Bida Emirate owns the tittle of Etsu of nupe.

There are three houses in Bida where Etsu of Nupe rotates. These are:
(A) USMAN ZAKI HOUSE
(B) MASABA HOUSE
(C) UMARU MAJIGI HOUSE

Since the beginning of Bida Emirate, these are the three houses that are ruling the Emirate.

Who is the first etsu nupe

Usman Zaki, became the first Etsu of Nupe in 1832.

The Emir Nupe is the traditional title for the most superior Emir of Nupe land. The Emir of Nupe is a first class chief. Nupes are found predominantly
in Niger State, which lies in the North Central geo-political zone, signifying the extent of the Emir’s influence. They are also found in Kogi State.

Who is Etsu of nupe

The Etsu of Nupe palace is located in Bida West in Niger State, along Wuya-Bida Road, next to Bida Local Government Secretariat.

The Etsu of Nupe palace is referred to in local dialect of Hausa as Hakorin Giwa, and Yikan
Dagba in the original Nupe language, interpreted in English as elephant’s tusk, and it serves administrative, cultural and social purposes.

The Etsu of Nupe palace was constructed in about 1935 by Muhammad Egba.

Etsu of Nupe palace, among other traditional palaces holds a rich cultural heritage in the North Central region of Nigeria.

These are the past events that brought about the present and future of nupe emirate.

His Riyal Highness Alhaji Yahaya Abubakar has an estimated net worth of approximately $800,000 US Dollar.

Have you found this post useful or Inspiring?
Do let me know your thought by commenting below.